Thermoindicator of melting of TIP type 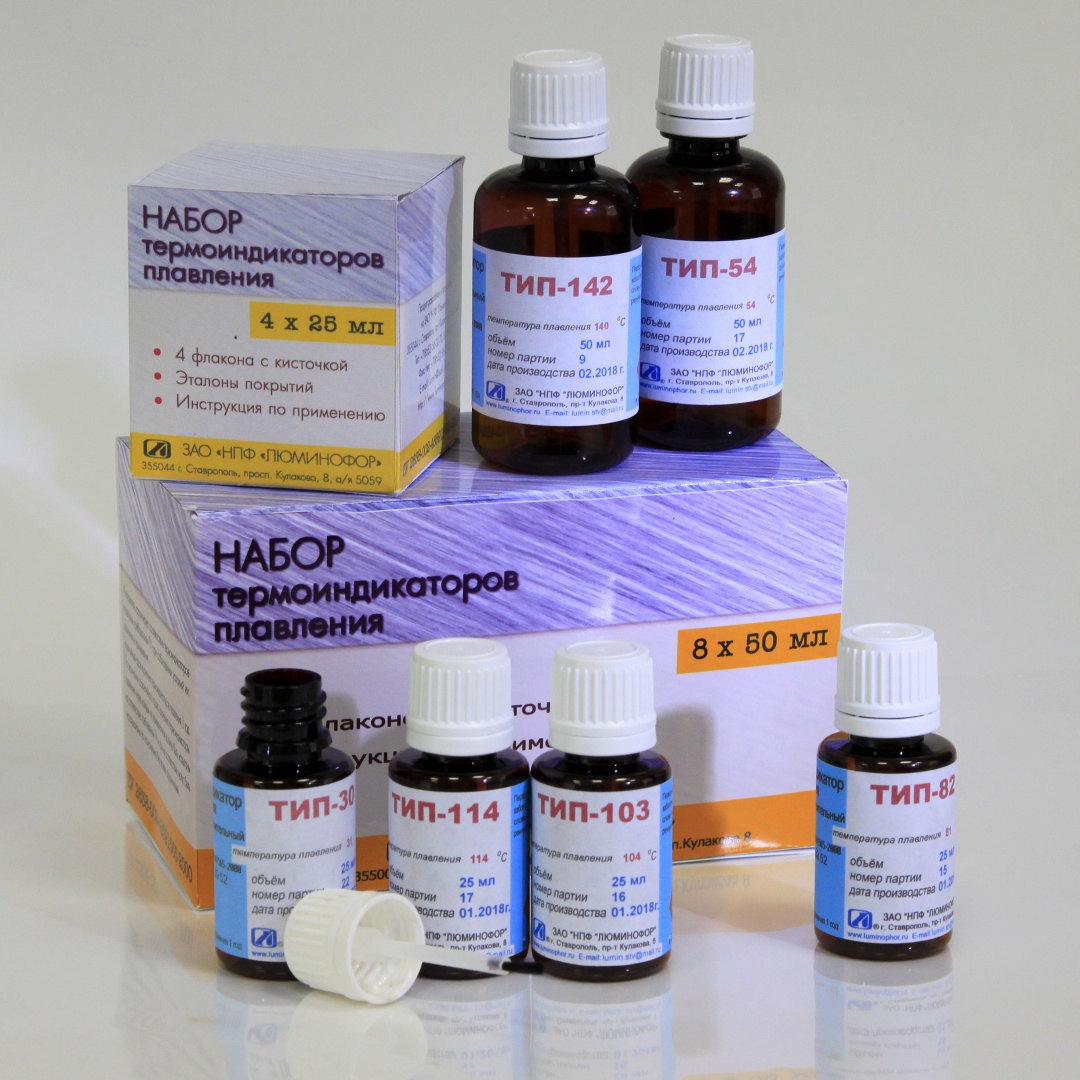 The sets of 4, 6, 8 names of thermoindicators are delivered in flasks with brush and of volume of 25 ml and 50 ml for each individual request.

Thermoindicators of melting (TIP) are high-dispersed suspensions of thermosensitive substances based on organic and inorganic chemical compounds and binders in organic solvents.

Most of TIPs are of white colour. When they response (melt) the investigated surface uncovers.

TIPs can additionally contain pigments-fillers (pigmented TIPs), dyers (coloured TIPs) or luminescent additives (fluorescent TIP). TIP with luminescent additives have a distinct contrast boundary of the colour transition which is clearly distinguished in not only daylight and electric light, but also in the dark under the influence of UV-radiation. The transition boundary can also be distinguished by the colour and intensity of the glow. TIP in the temperature range of 30-200 °C at UV-radiation (365 nm) before heating can have blue, green, yellow, orange or pink glow. The presence or absence of luminescence is an additional sign confirming the authenticity of the test results.

A protective film is delivered separately for the temperature range 50-255 °C. Increased humidity, solar radiation doesn’t influence the accuracy of TIPs readings (its measurement error is only ± 1 %).

Thermoindicators of melting can be applied on the investigated surface with a thinner layer (less than 0,04 mm).  As a result, the working speed increases and coating mass decreases.

TIPs are manufactured by the Technical Specification (ТУ) 2638-002-48591565-2000 «Thermoindicators of melting, high-sensitive» of the following modifications:

Thermoindicators of TIP type can be used in almost all cases of productional and researching practice for thermal regime control of:

The same thermoindicator modification in the temperature range of 30-322 °C can be used both at atmospheric pressure and in vacuum. When operating in vacuum, use of a protective film is obligatory for a series of thermoindicators. The protective film is the transparent lacquer protecting the surface of the thermal coating from the effects of aggressive media and evaporation.

Thermoindicator materials are used for overheating control of MC or chip cards in the electronics: 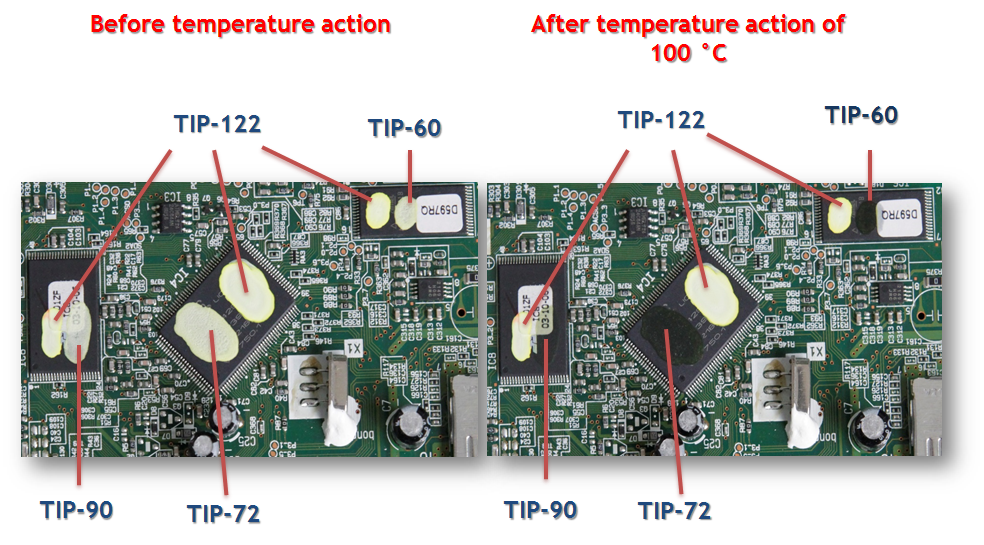 View of thermoindicator coating at UV-radiation:

This property of TIPs is used in condition of poor visibility and also as additional security element from counterfeit products. 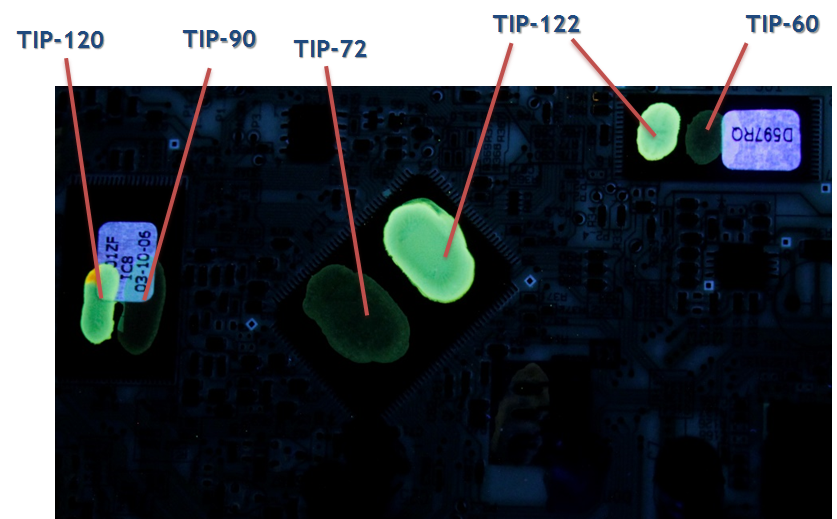 The method of temperature measuring by means of TIPs is simple, effective, with small laboriousness and gives the possibility to get operatively the full enough  information of the thermal conditions in constructions, sets and units in the wide temperature range.

TIPs not only allow to control the maximum temperature of an object but when provided the coating of a number of thermoindicators (as lines, dots) is applied to determine the temperature of the investigated surface as an arithmetical mean between the last thermoindicator mark which changed the colour and the first one remained unchanged.

When melting, the pigmented TIPs are also held out in the field of centrifugal forces under action of powerful gas flows.

TIPs allow to determine the temperature gradient on the whole controlled surface. The fixation of temperature fields determined by TIPs can be conducted by means of both coloured and black-and-white photography.

Coloured and pigmented TIPs provide an increased contrast of colour transition and are recommended for controlling and measuring the temperature of the object heated surfaces made of any constructional materials including white ceramics, glass and quartz. You can use TIPs with the luminescent additives in the darkness at UV-excitation (365 nm) source.

Thermoindicator coating with a protective film endures different climate conditions: that is, increased humidity up to 98% at the temperature of 50 °C; water action; temperature cyclic variations from -60 °C to +25 °C. It is stable to the influence of aggressive media (for example, burning products of oils, fuels) and atmospheric conditions (rain, snow, fog as well as sea fog).

Fill in the fields below. We will contact you shortly.

Thanks for your order

You will be contacted shortly.

An error has occurred